Nandos. Who doesn’t love them? I’ll tell you: mean spirited kitty-kicking Communists, that’s who. Maybe. Or maybe they also like Nandos. Anyway, it’s all besides the point. The point is that in addition to making awesome chicken (IMHO; that endorsement was not paid for), they also do great advertising…especially when they do send-ups of other brands.

The most recent battle is playing out as you read this. It’s Nandos vs Santam…and I think maybe this time, the chickens will have to put their money where their mouth is.

What’s cool about this is that there’s no stupid litigation involved. Instead, SANTAM has chosen to rather use a tactic that not only makes them look like a bunch of guys who can take a joke but also give a damn about people less fortunate than themselves.

The recent killing of American youth Trayvon Martin has been a flashpoint in race relations across the United States. Briefly: Trayvon (a black guy) was shot and killed in an allegedly unprovoked attack by George Zimmerman (a white guy). If you want more details, you can Google but what’s really surreal is the sudden wave of negative publicity that’s assailing the Skittles and Arizona Iced Tea brands. Yeah, that looks a little unrelated doesn’t it?

Anyway, here’s the catch-up: when Trayvon’s body was inspected, he was found to be carrying nothing more than a packet of Skittles and a bottle of Arizona Iced Tea.

The news spread like wildfire and the community rallied around these brands as key talking points, illustrating the ludicrousness of Zimmerman’s claim that he had acted in self-defence. As these things are wont to do, it took a life of its own, with protestors using the brands as visuals in their actions. For example:

Lets have an #AUCHoodieMarch for Trayvon Martin. We all wear hoodies and pass out skittles and bottles of tea. Anyone interested? (@LaurenRichelle1).

EVERYBODY BUY A BAG OF SKITTLES FOR THE MEMORY OFTRAYVON MARTIN #R.I.P. (@TeddyMeech)

Now both Skittles and Arizona Iced Tea have been accused of profiting from this unfortunate incident. Apparently, all these mentions add up to free advertising, earned media if you will, and there are people who aren’t happy about that.

That is disingenuous at best. Nowhere in any form do Skittles or Arizona Iced Tea associate themselves publicly with Trayvon or the incident – other than in sympathy with his loved ones. There are no official Skittle or Arizona Iced Tea sales campaigns on behalf of Trayvon. What has happened is that people have latched onto these brands as symbols of Trayvon’s innocence. Again, this is not a corporate campaign. No-one in a boardroom said, “Sales are down. Let’s have some white guy shoot some black guy in self-defence but wait…here’s the kicker. When they search the dead black kid, guess what? No weapons. Just Skittles. Genius, right!?” This kind of thinking makes no sense. It’s like saying Ford should cough up for all those extra mentions all those years ago when OJ SImpson made a run for it in his Ford Bronco.

Grow up America. Don’t let this become an issue because if it does, all you’re doing is trivialising the loss of a human life and losing sight of the fact that there are problems that desperately need solving within your communities. Fix that first.

And to Skittles and Arizona Iced Tea, you guys need to move faster to solidify your position in this matter. Stand up, decry the incident loudly and be vocal about the accusations that you guys are actively working to profit from this tragedy. And pray that calm heads prevail.

So here’s Hitler shilling for shampoo brand, Biomen and reminding you that if you’re not the kind of guy who wears women’s clothing, then you shouldn’t use a women’s shampoo [loosely translated from the Turkish]…

Yeah, I know some people are outraged but frankly I don’t see why. If we can all laugh at the Hitler Bunker meme, why can’t we laugh at this ad (other than the fact that it’s as funny as herpes)? It’s not a good ad, at all but it’s also not the worst I’ve seen. Take for example this piece of genius from the good folks over at Sylvania Light Bulbs in Thailand…

Sixteen thousand kilometers. That’s the distance from Cape Town, South Africa to Milan, Italy. It’s about 9 days to drive there. So it’s a quite a distance. Dolce & Gabbana’s head office doesn’t seem to think so. In fact, it would appear that they believe it’s the same as being on the same block…if their recent litigation against Cape Town brand &Banana is anything to go by.

Briefly, &Banana used to be Dolce & Banana, which is a cute play on the global brand’s name. &Banana sells jewellery and purses in a market where D&G doesn’t even have an outlet. Nonetheless, when the owner of &Banana was face with a lawsuit and forced to change the name of her business, she complied. Now, D&G want her to pay their $13 000 in legal costs and it looks like they’re not going to let it go.

D&G really aren’t doing themselves any favours here. While it’s true that legally they may have had a claim against &Banana, they could have easily brought her into the fold as it were, maybe even given her some support by tipping their hat to her and just basically come off like a serious business that understands a joke when it sees it. Instead, they’ve got their proverbial panties in a twist and now, not content with having bullied a smaller business that was no competition at all for their brand, they want to leave it a few grand poorer.

Well done, Dolce & Gabanna. You’ve proven that your brand doesn’t understand anything but profits. Clearly business must be really bad if you’re stooping this low to get some coins to fatten up that bottom line. And while you may never really care about what anyone thinks and while your target market may not give a damn, rest assured that D&G has been negatively selected from my list of brands to purchase going forward. No, it’s not much but I for one won’t be spending a red cent on a brand that’s as ruthless as Dolce & Gabanna.

I hate Microsoft. I really do. Oh, and you Apple-heads can shut up too because I’m not that much of a fan of the Cult Of Jobs either.

Anyway, if you’ve read this blog for any amount of time, you’ll know about my aforementioned disdain for Microsoft. From their sophomoric attempts to ingratiate themselves with their market to that abysmal advertising abortion starring Jerry Seinfeld, Microsoft have time and again given me cause to stand up…and run for the bathroom before I projectile vomit all over my (LINUX POWERED) computer in a physical manifestation of my disgust at having been subjected to their inanity.

That said, I think they may be on to something with this new campaign. Presenting the browser you loved to hate, the new IE campaign from Microsoft. 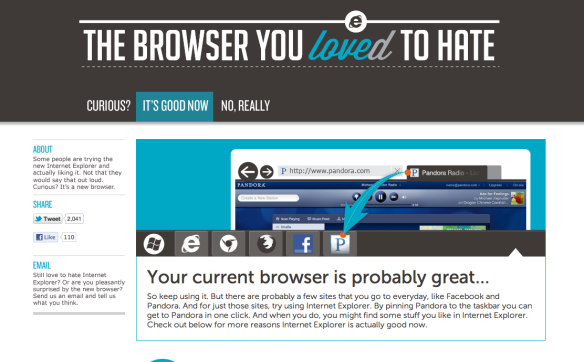 So it looks like Microsoft have tried to shoot for the humour angle…and self-deprecating humour at that. Maybe they’ve finally figured out, if the whole world thinks you’re a joke, you may as well laugh along with them.

My only issue is the slight residual taste of arrogance in the used of  “loveD“. To my mind, that’s a little premature. Rather let the market decide if they still hate you or not. It would have been cooler if they were all about a full-on conversion campaign and then got folks to give up their favourite browsers for a week in favour of IE – and shot it documentary style. Maybe they’ll do that for phase 2?

Check Out These Awesome Blogs!